Although Covid-19 and the associated lockdown measures are still an important part of our daily lives, it increasingly seems that we can be more optimistic as vaccination of the population has started in almost all countries in the world.

In countries such as the US and the UK, a third of the population has already been vaccinated, which means that group immunity is rapidly approaching and 'normal' life can be resumed soon. It is remarkable that the European Union so far has lagged behind in vaccinating its own population. On the one hand, this is because the European Union, like Russia and China, exports around 40% of the vaccines produced to the rest of the world, while the US and the UK use all vaccines produced for their own population. On the other hand, however, this is also due to the poorly coordinated policies of the countries within the European Union. As a result of this, in 2021 both group immunity and the economic recovery in the European Union will be later and slower than in the US and UK.

As soon as Covid-19 and the lockdowns start to shift more and more into the background in the course of 2021, it seems almost inevitable that concerns about the climate (again) will increasingly predominate the news.

Global warming is increasingly becoming a source of concern and is reflected, among other things, in an increase in the average temperature in the US of more than 1.5 degrees since 1950. In 2019, the European Union announced a Green Deal with which they wanted to put climate prominently on the agenda. In the meantime, President Biden has also announced that, unlike his predecessor, he sees the climate as one of the spearheads of his policy. The realization has also dawned on the financial markets that policymakers are serious. Shares of companies in global renewables have strongly outperformed the shares of companies in the oil and gas sector since 2019.

It is also astonishing how far China is lagging behind given the severity of air pollution and it is positive to see that, in contrast to vaccination, regarding  environmental measures in general and recycling in particular, there is also an area in which the European Union is leading. The enormous investments that will accompany the theme of climate control in the coming decades are positive for structural economic growth in the world. In order to make these (government) investments possible, Central Banks will, also due to the already very high debt burden and despite the rising inflation expectations, be prepared to keep interest rates structurally low.

With a) the prospect of increasing group immunity and an end to the lockdowns in 2021, b) the structurally high investments in climate control and c) Central Banks keeping interest rates low for a long time, the economic outlook for the coming years is positive and the likelihood of an economic recession remains small. Indicators such as the German IFO and the FED recession model also increasingly indicate this for both the Eurozone and the US.

The first quarter of 2021 was characterized by positive returns for risky assets. The highest returns (in euro) were realized on Commodities in general (CRB Commodity Index +14.8%) and Oil (+27.7%) and Copper (+18.1%) in particular. Returns on equities (MSCI World +9.2%) were also relatively high. On the other hand, the somewhat more defensive assets such as Gold (-6.3%), US Treasuries (-2.9%), Emerging Market Bonds (-2.8%) and German government bonds (-2.4%) all realized a negative return. Global High Yield Bonds at +4.0% is one bond category that did achieve a positive return in the first quarter. All in all, this is a clear indication that investors are still expecting a relatively strong economic recovery.

In contrast to 2020, the Euro depreciated against many currencies in the first quarter of 2021: The Euro fell significantly against both the USD (-4.1%) and the GBP (-5.1%). The main causes are the widening interest rate differential and the lagging vaccination program compared to the US and UK. Because of the lagging vaccination program, the economic recovery in the European Union will likely take place later and in a lower pace compared to the US and UK 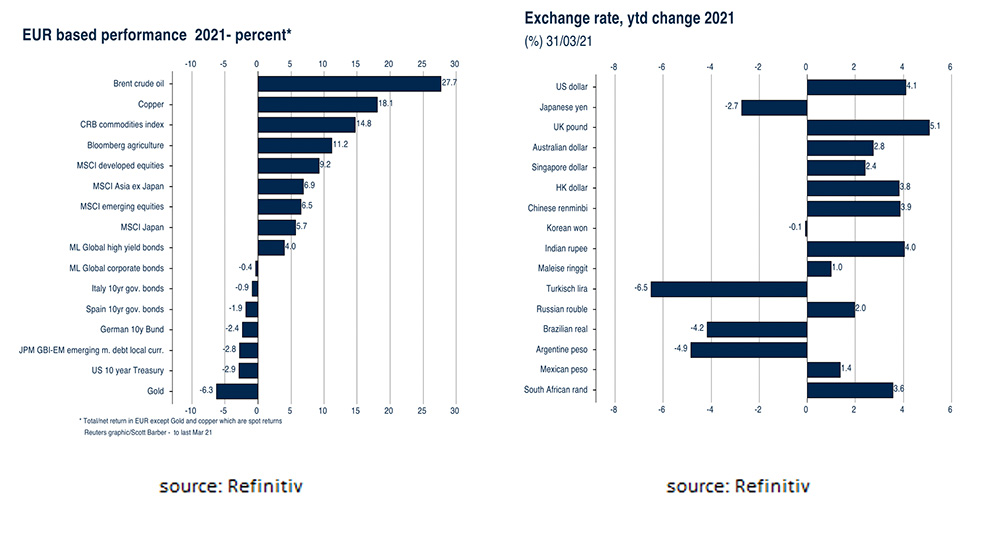 In our view, the outlook for equities remains favorable in 2021. Equities may be expensive from a historical perspective, but the same applies to the historically low interest rates, the relatively strong economic recovery in 2021 and 2022 and the better-than-expected earnings development in the corporate sector. So far, analysts have been forced to revise their earnings expectations upwards again and again.

For some categories which we started to recommend several months ago, such as Small Cap shares, the lagging performance has almost disappeared. However, for other categories, such as value, high dividend and Emerging Market shares, this is not the case yet and it seems as if the catch-up has only just started.

Thanks to the sharp rise in interest rates in the US, the yield on 10-year US Treasuries is above the dividend yield on equities for the first time since early 2019. For some defensive investors, US Treasuries, unlike German government bonds, are therefore again becoming a good alternative to equities. However, we remain of the view that as long as there is an imminent strong economic recovery, rising inflation and policymakers keeping monetary and fiscal policies extremely loose, yields on both German (-0.33%) and US (+1.75%) government bonds remain unattractive to an investor for the time being.

In a bond portfolio, we therefore continue to prefer the somewhat riskier, but also more attractive yields on Global High Yield and Emerging Market Debt.

The strong performance of commodities (+14.8%) in general and Crude Oil (+27.7%) in particular in the first quarter of 2021 is not entirely unexpected. The graph below clearly shows that commodities can be a good investment in an economic recovery. This was the case in 2004, 2009 and 2016. In view of the expected economic recovery in 2021 and 2022, we continue to recommend commodities as an attractive investment. 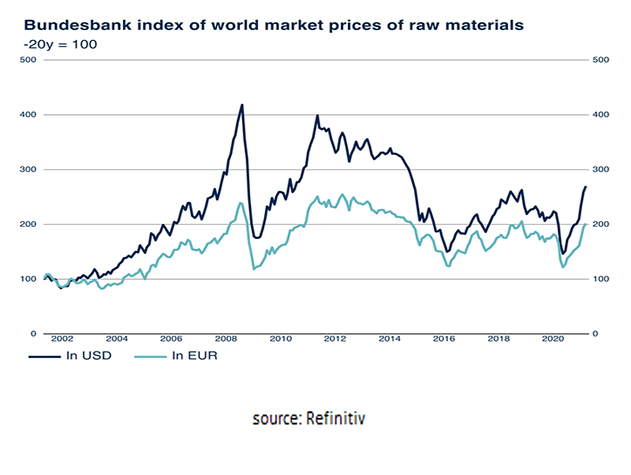 While the Euro is still an undervalued currency, the Euro has been under pressure against the USD and GBP so far in 2021. This is mainly due to the extremely low interest rates in the Eurozone versus the rising interest rates in the US and the UK. In addition, the chaotic vaccination policy in the Eurozone is slowing down the economic recovery. These factors are expected to continue to be a disadvantage for the Euro for a large part of 2021.

The highest return in recent months was realized on a number of crypto currencies such as Bitcoin. For now, however, we do not see this category of “currencies” as a asset class. Crypto currencies are still too speculative and insufficiently regulated to be a serious asset class in an investment portfolio.

While the information contained in the document has been formulated with all due care, it is provided by Trustmoore for information purposes only and does not constitute an offer, invitation or inducement to contract. The information herein does not constitute legal, tax, regulatory, accounting or other professional advice and therefore we would encourage you to seek appropriate professional advice before considering a transaction as described in this document.
No liability is accepted whatsoever for any direct or consequential loss arising from the use of this document. The text of this disclaimer is not exhaustive, further details can be found here.

This website uses cookies to improve your experience while you navigate through the website. Out of these, the cookies that are categorized as necessary are stored on your browser as they are essential for the working of basic functionalities of the website. We also use third-party cookies that help us analyze and understand how you use this website. These cookies will be stored in your browser only with your consent. You also have the option to opt-out of these cookies. But opting out of some of these cookies may affect your browsing experience.
Necessary Always Enabled

Statistics: These cookies store information like the number of visitors to our website, the number of unique visitors, which pages of the website have been visited, the source of the visit, etc. These data help us understand and analyze how well the website performs and where it needs improvement.