MAS Tightens Criteria for Family Offices: What This Means for You.

In a recent move, the Monetary Authority of Singapore (MAS) tightened the criteria for family offices and their funds in order to qualify for the tax exemptions under sections 13O and 13U of the Income Tax Act (ITA). The new criteria are aimed at increasing the size of the funds, improving the fund manager's expertise and boosting investments in the local economy. What does this mean for you? In this article, we will summarize the changes in MAS' family office criteria and explain what consequences they have.

Singapore has earned a reputation as a desirable destination for high-net-worth families seeking to professionalize the management of their money. Singapore offers tax exemptions for funds managed by Singapore-based fund managers that are licensed by the MAS. These exceptions also apply to funds managed by fund managers who are exempt from the rules. Managers of Family Offices are one such example.

What will the future hold for Singaporean family offices?

All new family office applications to the MAS after April 18th 2022, will be subject to the revised standards. Applications which have been submitted earlier, will likely not be affected. Additionally, the changes do not apply to funds managed or advised by a licensed fund manager in Singapore.

Funds under section 13U: Changes to incentive requirements

Funds under 13U are fund vehicles that can be constituted and maintained in Singapore or outside of the country.

Below an overview of all changes in one table: 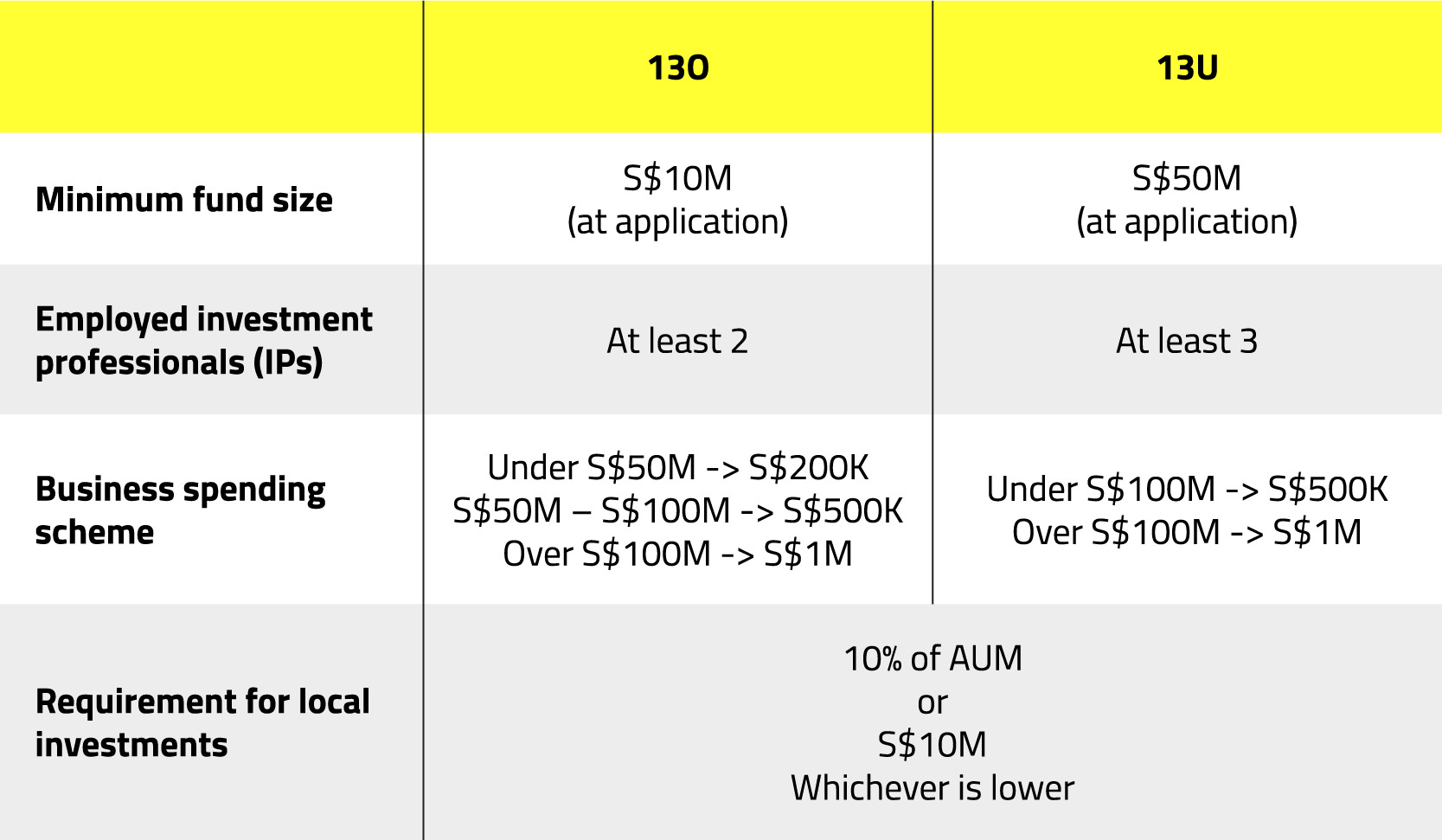 Looking at the most recent manufacturing PMIs, it's no wonder that most economists assume that a recession is not imminent anytime soon. In most countries and regions, the PMI is still well above the critical level of 50. 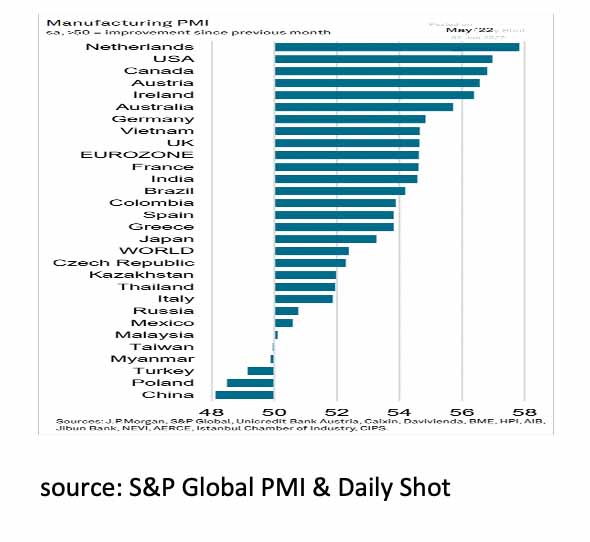 The models of, for example, S&P and Oxford Economics also indicate that the chance of a recession is still small.

Despite this optimism, the economy in the US ('22Q1 -0.3%), Japan ('22Q1 -0.2%) and Germany ('21Q4 -0.3%) recently showed negative growth, while the Netherlands could only just prevent a contraction ('22Q1 0.0%). We therefore believe, contrary to consensus, that in the current climate of war, sanctions, inflation and monetary tightening by central banks, negative growth quarters cannot be ruled out, nor can a recession, being two consecutive quarters with negative growth. In fact, if we look at the past, we think it is reasonable to assume that a recession is almost inevitable.

In March, the yield curve in the US was briefly inverted, meaning that the 2-year yield was higher than the 10-year yield. In the past, every recession in the US has been preceded by a (temporarily) inverted yield curve. In addition, the FED started raising interest rates in March. Every recession in the US has followed a period of monetary tightening by the FED in the past. When we look at some key economic indicators, the likelihood of a recession seems high.

As a result of high inflation and lagging wage growth, households in all regions are seeing their real disposable income fall significantly. So far, despite soaring prices, consumers have continued to buy more goods and services. This was possible because households were willing and able to save less. However, the chart at the top right shows that we have reached a point where this will become less possible. Households can only afford the higher prices if they receive a significant wage increase. Since the probability of this happening is small, it seems inevitable that consumption in real terms (volume) will come under increasing pressure. We can see this clearly in the two charts below with consumption in the Eurozone.

Clearly visible in the Eurozone is the decline in purchasing power and the difference between retail sales in value and in volume.

Although inflation is too high, it is still largely due to the extremely high energy prices. It seems likely that these will peak soon in the year-on-year comparison and inflation will begin to fall again. However, like Nordea Bank, we believe that, as a result of the war, sanctions, loss of purchasing power and global monetary tightening, a recession at the end of 2022 early 2023 is almost unavoidable. However, the recession could remain relatively mild if central banks do not raise interest rates too aggressively and only pursue QT to a very limited extent.

The significant appreciation of the USD against the Euro came to a (temporary) end in May. Causes included the expectation that the FED might raise interest rates less aggressively in 2022 and the increased chance of a first-rate hike by the ECB. However, higher interest rates and economic growth will continue to favor the USD in 2022.

While equity markets were volatile in May, on balance both the MSCI World Index and the S&P 500 ended the month largely unchanged. The worst return was achieved in India (-6%) and the highest in Brazil (+6%). The energy sector delivered the highest returns (again), while the consumer staples, consumer discretionary and real estate sectors lagged strongly.

As a result of falling equities and increasing corporate profits, the P/E ratio fell 20% so far this year to 17x. This level is equal to the average over the past 25 years.

Despite the fact that the chances of a recession are significant, equities do not seem expensive on average and corporate fundamentals are mostly strong and healthy. Companies have more cash in their balance sheets than ever before, the Net Debt to EBITDA of the S&P 500 is the lowest in the past 30 years at 1.0 and, unlike in 2001, there is no question of an IT bubble.

In the short term, however, it seems advisable to wait and see if the S&P 500 manages to break the resistance around the 4200 level.

With the prospect of weak growth and less inflation, it still seems advisable to keep an overweight in value and small cap stocks.

So far in 2022, interest rates have risen significantly worldwide. On the one hand, this is the result of inflation expectations that have risen in both the short and long term. On the other hand, this is a result of the increased risk premium since Central Banks have stopped using Quantitative Easing (QE) and are even talking about Quantitative Tightening (QT). In May, however, there was clearly a turning point. While real interest rates continued to rise as a result of the forthcoming Quantitative Tightening, inflation expectations fell. As a result, US Treasury yields fell in May, with the 30-year interest rate as an exception.

With a yield of almost 3% and the prospect of weak economic growth and less inflation, US Treasuries seem to be becoming interesting for a long-term investor since a long time. However, in the short term it may be advisable to wait a while before investing in US government bonds. The (potential) selling pressure of UST from the Quantitative Tightening by the FED could lead to a further rise in US interest rates in the coming weeks. For the time being, we therefore continue to prefer the shorter maturities and higher interest rates of Investment Grade Corporate Bonds and High Yield bonds.

As a result of the ongoing war in Ukraine and the new measures taken by the EU countries to accelerate the reduction of dependence on Russian oil, the oil price rose further in May to USD117 and appears to be heading towards the USD145 peak seen in 2008. As long as the war in Ukraine continues, sanctions are tightened and there is no recession yet, the current super cycle in Commodities can continue and can continue to outperform equities. A period in which Commodities outperform equities for a longer period of time has only happened four times since 1900 and does not seem to end this time yet.

Finally, some charts about the housing market. Mortgage rates have risen substantially this year in both the US and the Eurozone. As a result, the monthly payment on a new mortgage has risen sharply, the Housing Affordability Ratio has fallen sharply and the rise in house prices seems to be coming to an end soon. 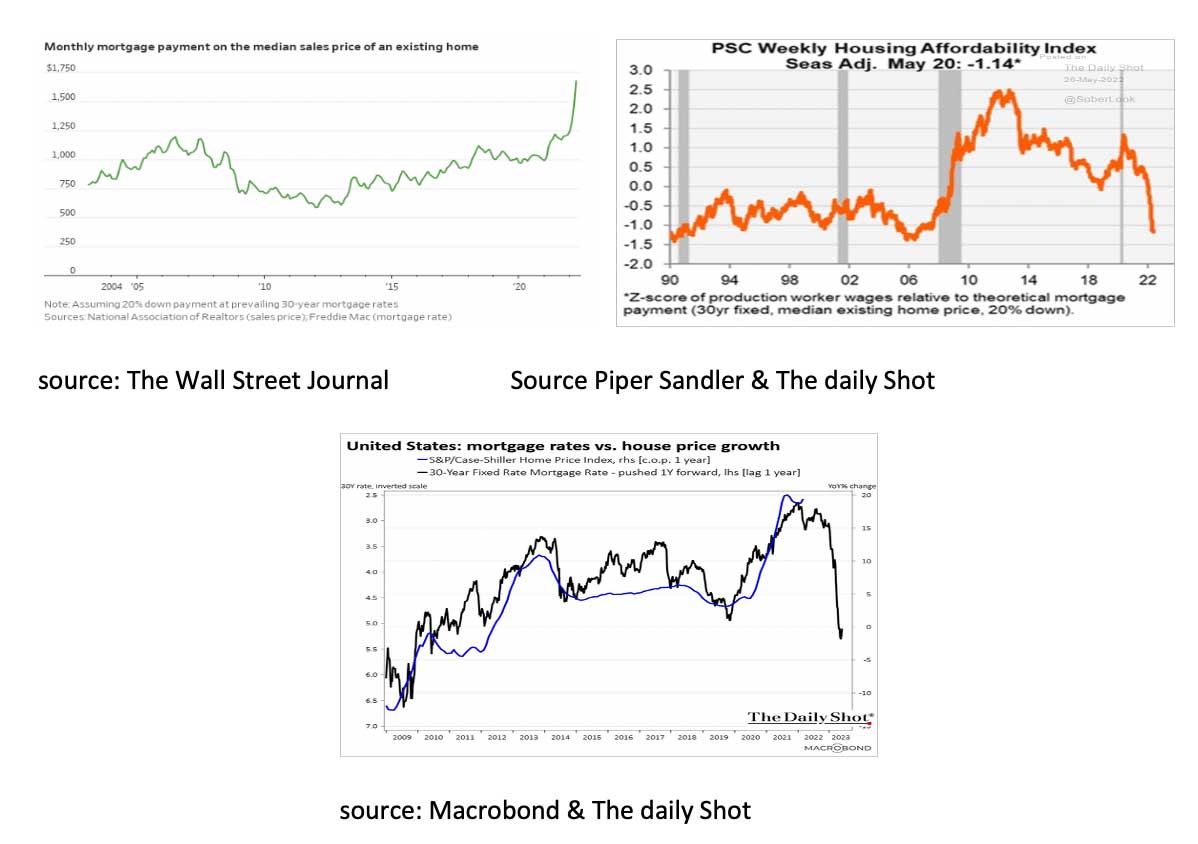 While the information contained in the document has been formulated with all due care, it is provided by Trustmoore for information purposes only and does not constitute an offer, invitation or inducement to contract. The information herein does not constitute legal, tax, regulatory, accounting or other professional advice and therefore we would encourage you to seek appropriate professional advice before considering a transaction as described in this document. Any reference to third parties does not constitute an advertisement neither implies an affiliation with Trustmoore. Therefore, no liability is accepted whatsoever for any direct or consequential loss arising from the use of this document and from any reference to third party’s articles or opinions. The text of this disclaimer is not exhaustive, further details can be found here.