We were hoping to start the monthly report with positive news. Corona is on its way back, the lockdowns are over, the bottlenecks in the economy are gradually disappearing and inflation expectations were already declining. The biggest concern of economists and financial markets was when and by how much the US Central Bank, the FED, would raise interest rates. 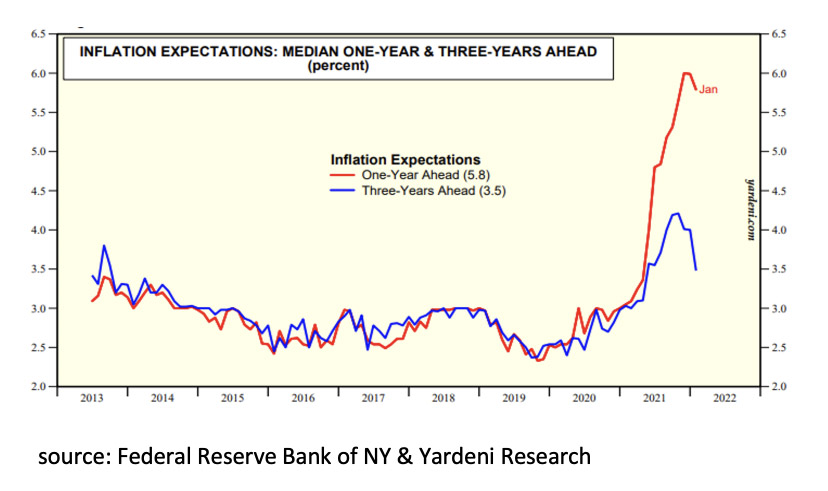 While there had been ample warning from the US about Russia's intentions, President Putin's military invasion came as a complete surprise to many. The tragedy currently unfolding for the citizens of Ukraine, the severe sanctions imposed against Russia and the subsequent rise in commodity prices mean that recent macroeconomic figures say little or nothing about the immediate economic future. It is unknown which scenario will develop and how big the effects will be for the economy. Many scenarios are conceivable. For example, domestic opposition, perhaps driven by Western sanctions, may repent President Putin or the Russian military fails to bring Ukraine under control. However, the most likely scenario seems to be that negative news will continue to dominate for the time being. Initially, the news will be mainly about the war itself. Russia wants to eliminate the Ukrainian army and wants to take power in Kiev, causing many innocent civilian victims. Although Russia has misjudged the resistance, the Russian force majeure seems to be too large to count on a positive outcome. Moreover, the loss of face for Putin would be too great to return home empty-handed, which means that a hardening of the battle is likely. That President Putin has put his country's nuclear power on a heightened state of readiness fits into that picture. While the negative news will continue to dominate in the near term, the chance of a military escalation appears limited. Ukraine is not a member of NATO, so no Article 5 attack will go into effect. Although NATO will station more troops in Ukraine's neighboring countries, an active role in a ground war seems out of the question. Looking at the economy, it is clear that the Russian economy is too small to lead to major negative spill overs in the global economy. 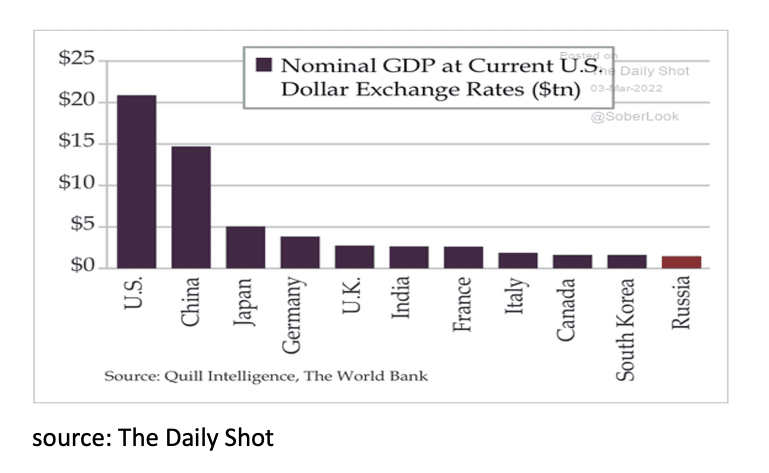 Sanctions do have that risk, however, and next to Russia, Europe is without a doubt the economy that has the most to lose. Even in a strongly escalating sanctions war, the US and Asia will suffer only limited negative consequences. While the Gulf States in the Middle East are even benefiting thanks to higher oil prices. The dangers to the global economy are, according to calculations by Oxford Economics, manageable but also highly dependent on the duration of the war and sanctions. 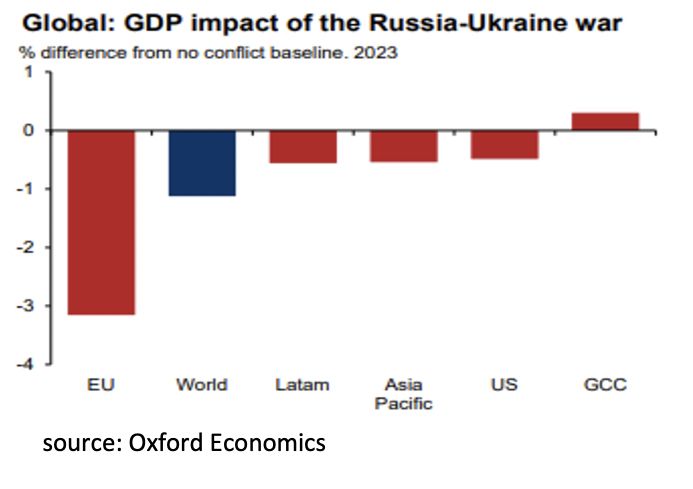 Oxford Economics also clearly shows in its calculations what caused the lower economic growth in 2022 and 2023. The war itself, the baseline scenario, has a significantly smaller effect on economic growth than the sanctions that have been imposed, the downside scenario. 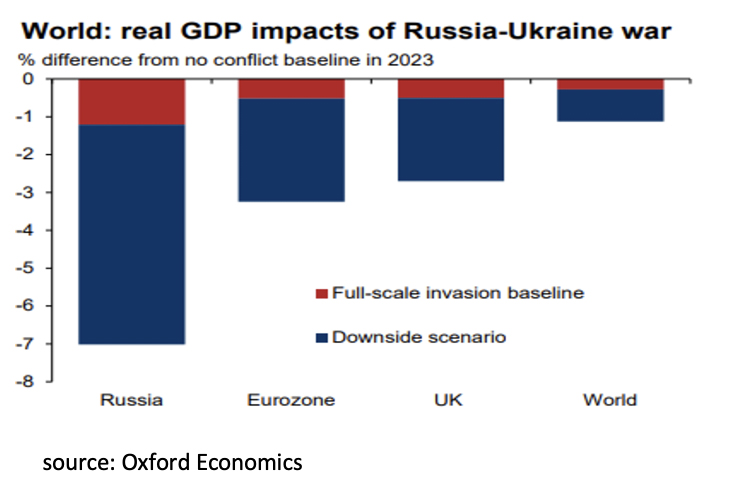 Besides the length of the war in Ukraine and the sanctions, it is also crucial on the short term whether Russia will restrict the supply of gas. Europe is highly dependent on gas from Russia. The above calculations are therefore certainly not the worst-case scenario that can develop. 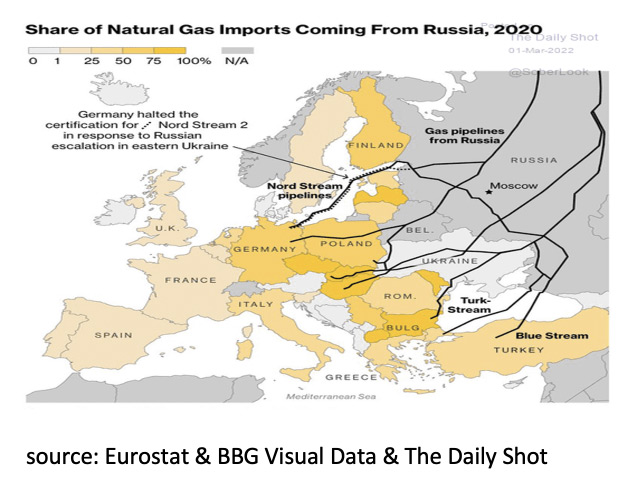 In such a case, the damage to the European economy will be considerably greater than the calculations of Oxford Economics indicate. In that case, not only will companies face production constraints, but household purchasing power will come under prolonged pressure as this will lead to a further rise in the already high inflation. Even without the scenario in which Russia stops supplying gas to Europe, it seems inevitable that inflation will remain high for longer than expected until recently. Both Russia and Ukraine are important suppliers of raw materials. The sanctions against Russia and the war in Ukraine will irrevocably lead to higher prices of many raw materials. 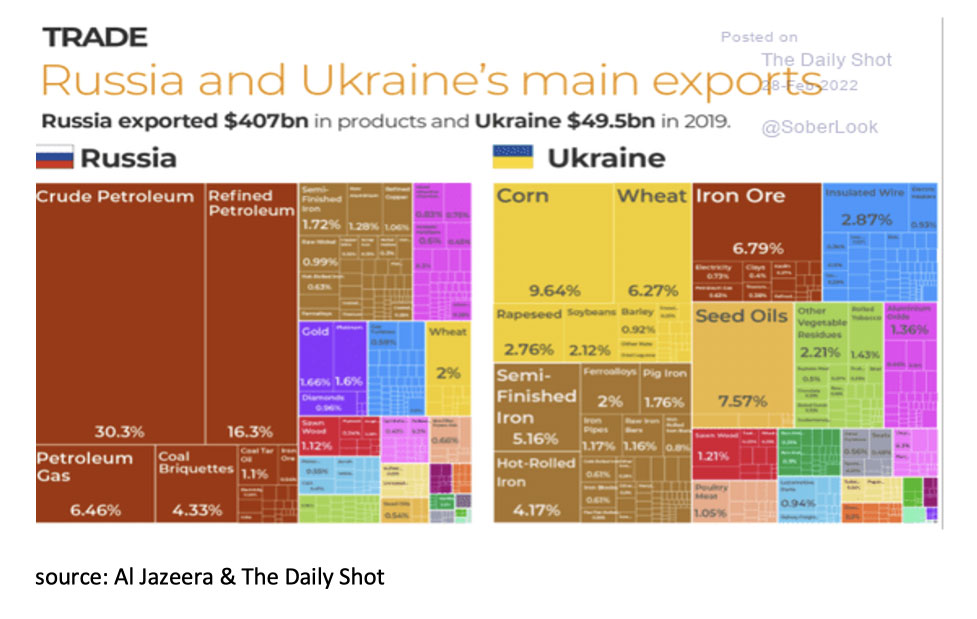 Not surprisingly, then, in the days after the war broke out and sanctions were imposed, commodities posted their biggest weekly gains since the 1970s, with Wheat, Oil, Gas, and Corn being the biggest gainers of all.

What matters now is how central banks deal with the situation, are they raising interest rates to fight inflation, or is current monetary policy being maintained to stimulate the economy? The idea that the ECB will now opt for a tightening monetary policy seems out of the question. While central banks, such as the FED, have until now been accused of lagging behind, the tragedy in Ukraine provides a reason for central banks to view inflation as an external and a temporary shock. The expectations regarding central bank policies in 2022 were therefore completely turned around last week. The current expectation is much more that monetary policy will remain relatively accommodative. In addition, there are already voices in a European context to compensate households in some way for the higher energy prices. Another positive side-effect for the economy is that, now that the fear of war is back in Europe, many countries are announcing to substantially increase their defense spending: Germany has already announced that its defense budget will be increased by €100 billion this year. 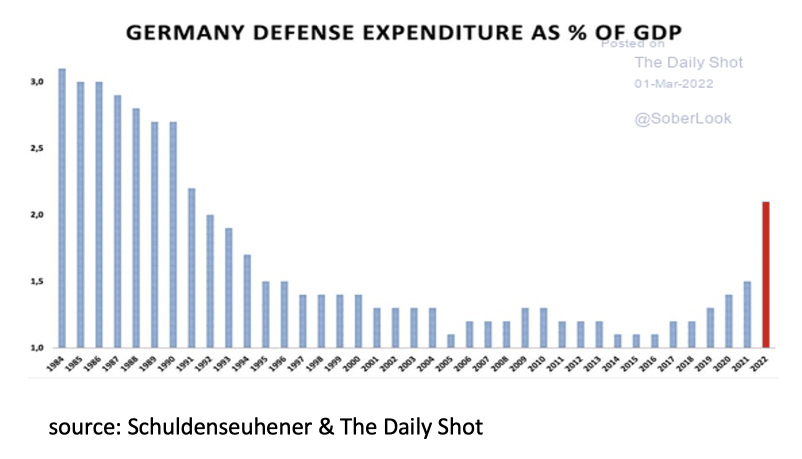 Although the tragedy in Ukraine is unprecedented and the sanctions are significantly damaging the global economy, there are also factors that are positive. Monetary policy will remain loose longer than expected and in many cases, governments have already decided to significantly increase their defense spending. In addition, the first talks within the European Union have already started to compensate households in some way for the higher energy prices. In the US, it seems only a matter of time before high oil and gas prices will see a sharp increase in investment in oil and gas production. 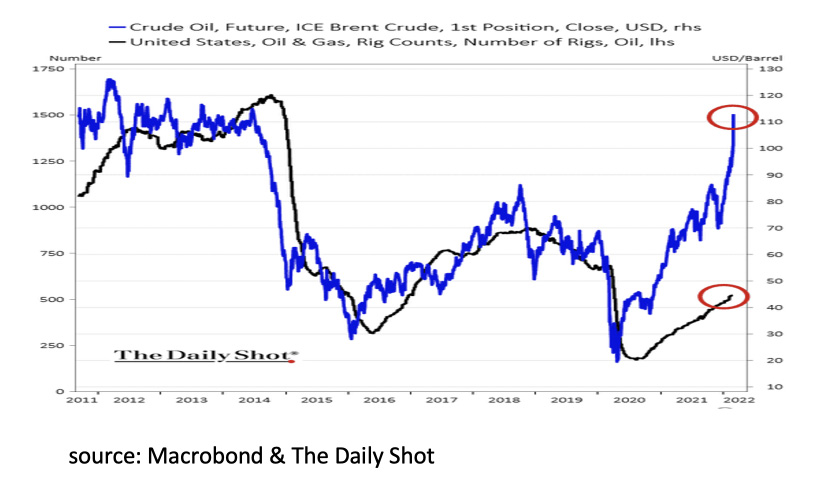 In addition, the Chinese economy also seems to be able to slowly recover from all the corona problems. Despite all these positive factors, the risk of a prolonged conflict and a significantly worse scenario remain high. For the time being, the most reliable leading indicator in the financial markets, the US yield curve, still indicates that a recession in the US is not imminent for the time being: Every recession in the past 70 years has not happened until 6 to 18 months after the US yield curve (UST 10-2yr) turned negative (inverted). For the time being, this is still not the case (+33bp on 03-03-'22). 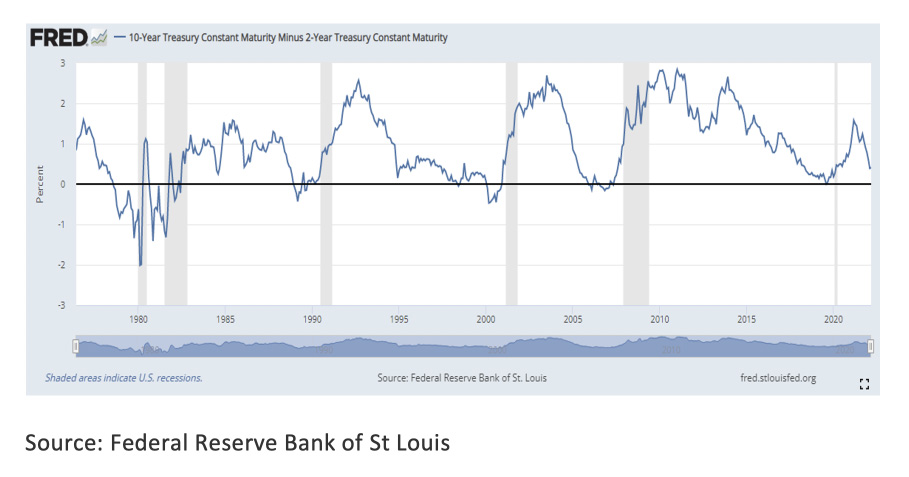 That being said, such a sharp rise in oil prices since 1970 has almost always been followed by a recession in the US. Crucial in the coming weeks will be how long the war and sanctions will last, whether Russia will stop gas supplies to Europe and what measures policymakers in Europe and the US are prepared to take to avoid a potential recession. 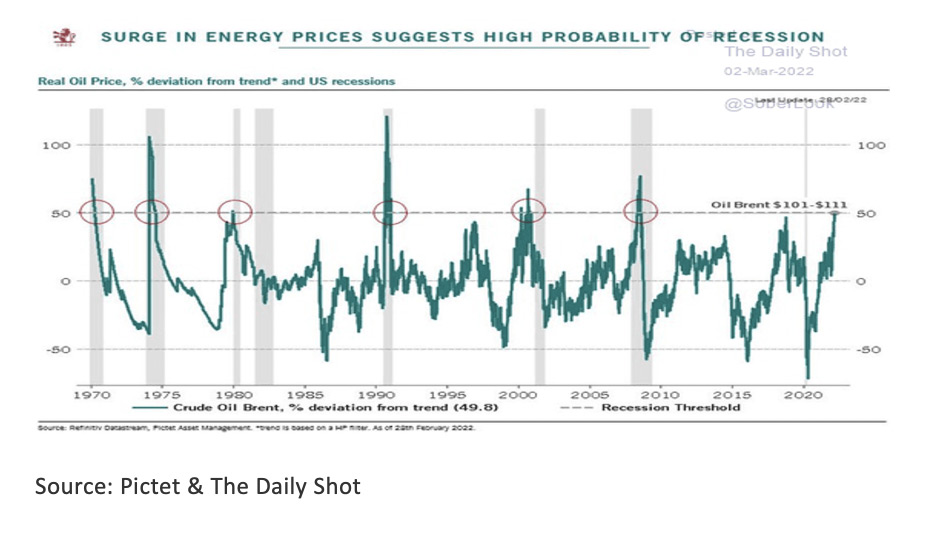 The financial markets reacted to the war in Ukraine, just as financial markets almost always react to a crisis. Investors flee in the safe havens Gold and US dollar and less this time in government bonds. Inflation risks offset the usual safe haven status of US Treasuries.

In these events equities normally face severe setbacks and volatility comes along with this.

Biggest winners were Commodities in general and Oil and Gas in particular. 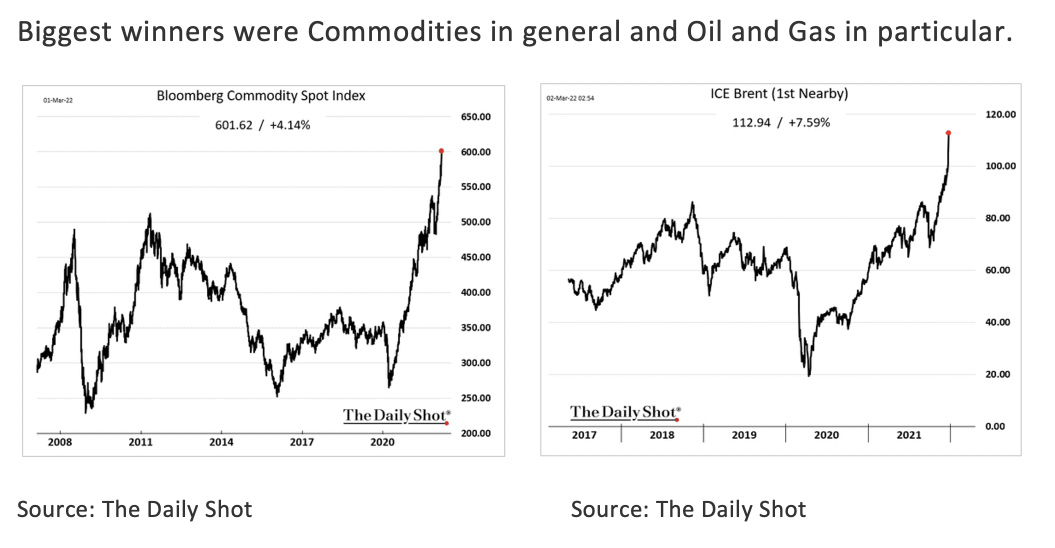 In the stock market, only the energy sector, Small Cap and High Beta companies achieved positive returns. The biggest decliners were the commercial service sector and growth stocks. 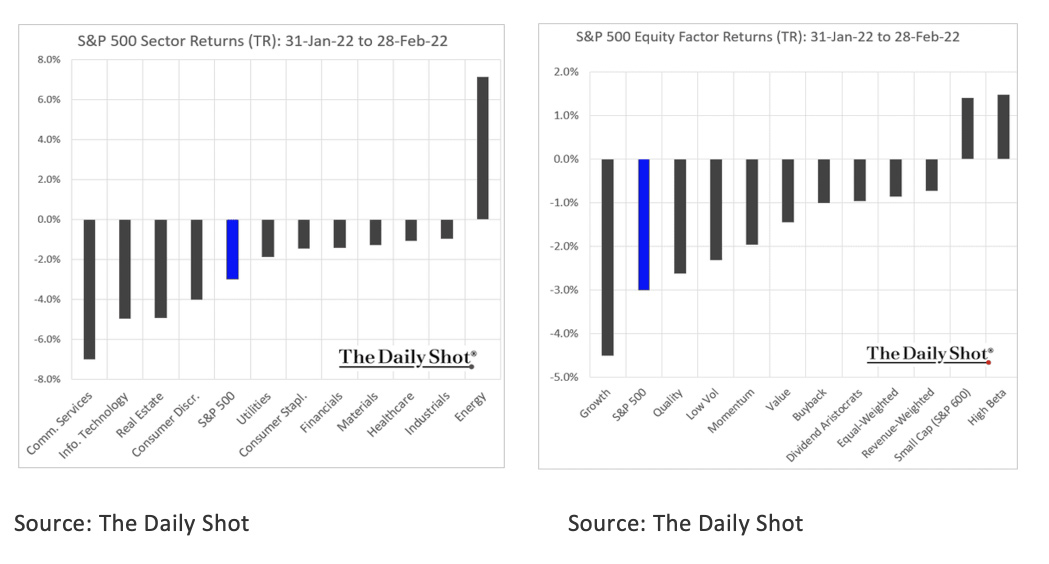 Although it is extremely difficult in the current climate to make a statement about the prospects for the various asset classes because you would have to get inside President Putin's head, we still want to give it a try, as always. The old stock market wisdoms is to “sit still when you are being shaved”. The saying argues against panic selling after the stock market has already fallen a lot. Ever since Baron Rothschild, after the Battle of Waterloo in 1815, argued in favor of buying right after the stock markets have fallen sharply, we see this acknowledged in below overview. 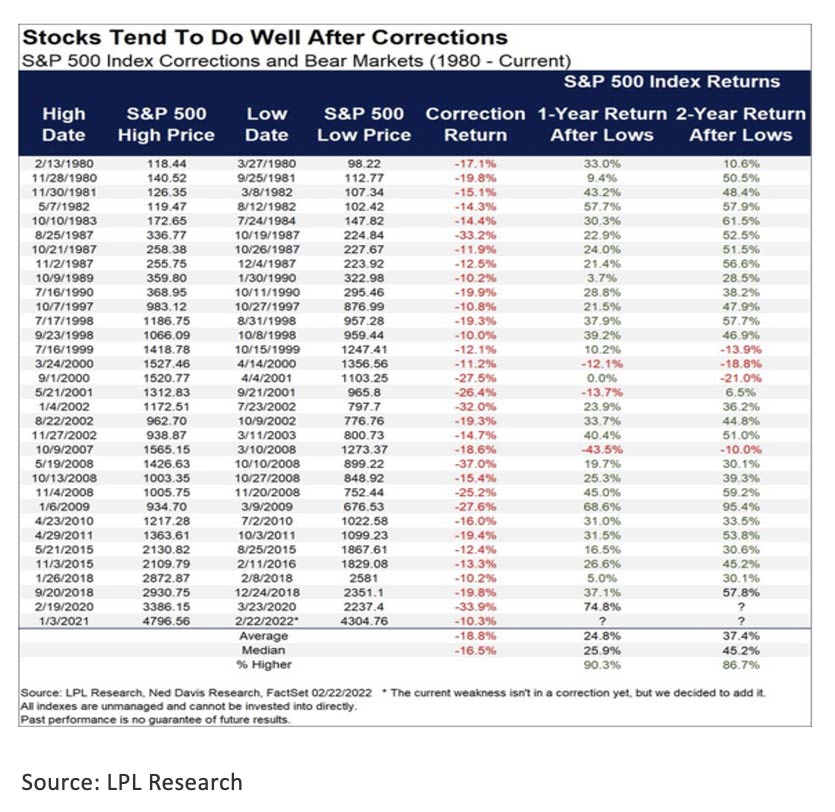 After 33 corrections of 10% or more since 1980, the S&P 500 was up a whopping 30 times one year later, with an average rise of 24.8%. Only three times was the S&P 500 lower one year later. For those who think it must be different because this time it concerns a decline as a result of a war, see below that Baron Rothschild's position was valid even after the Japanese attack on Pearl Harbor in 1941. The only three exceptions were the Suez Canal crisis in 1956, the Oil crisis in 1973 and the 2001 WTC attack. 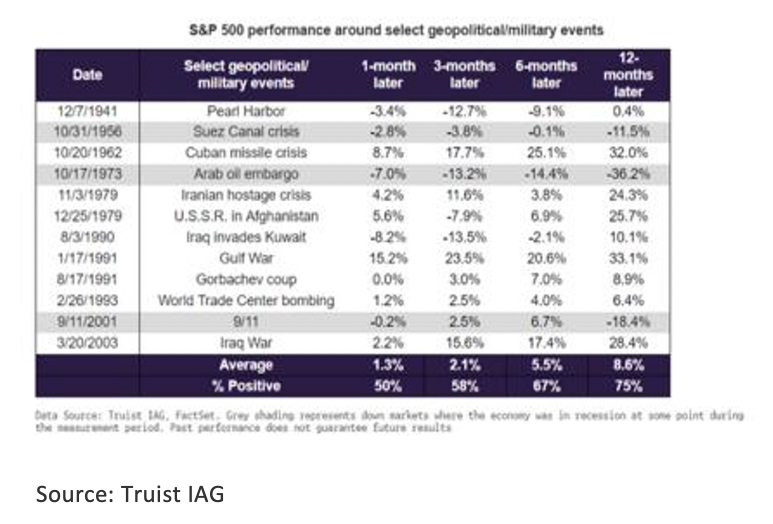 While no one can predict how the Russian attack on Ukraine and the additional sanctions will progress, it seems unwise for an investor with a long-term horizon to panic and sell stocks now. Further corrections from these prices seem more likely to be good buying opportunities. However, growth stocks still seem overvalued relative to value stocks. 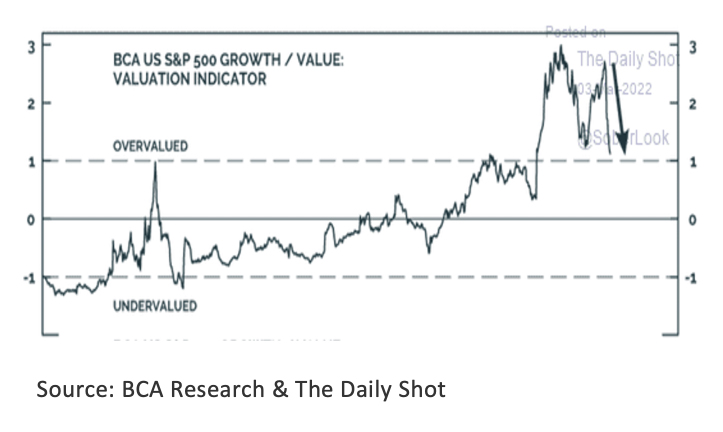 The current crisis shows once again why we have been negative about government bonds for quite some time. In a crisis situation, government bonds in the US and Germany usually act as a safe haven. That is less the case this time. This is mainly because the interest rate in both the US (10 year 1.84%) and Germany (10 year 0.04%) is way too low to compensate for the current very high inflation. Holding government bonds means a loss of purchasing power guaranteed in advance.

Both in the corona crisis and in the current crisis, commodities are the asset class with one of the best performances. While the cause in the corona crisis was both the bottlenecks and the increase in demand, the cause of the current crisis is mainly due to the war and the sanctions, which put pressure on the supply of many raw materials. In addition, as usual in a crisis, gold acts as a safe haven. As long as the current crisis lasts, upward pressure on commodities will likely continue. In that regard, the chart below on the left shows that, compared to the past, there is certainly still room for further gains. In addition, as the chart below on the right shows, inventories are low.

However, it should not be forgotten that Commodities as an asset class are now substantially overbought. It seems advisable to reduce positions in Commodities as soon as the war in Ukraine and/or the sanctions come to an end. 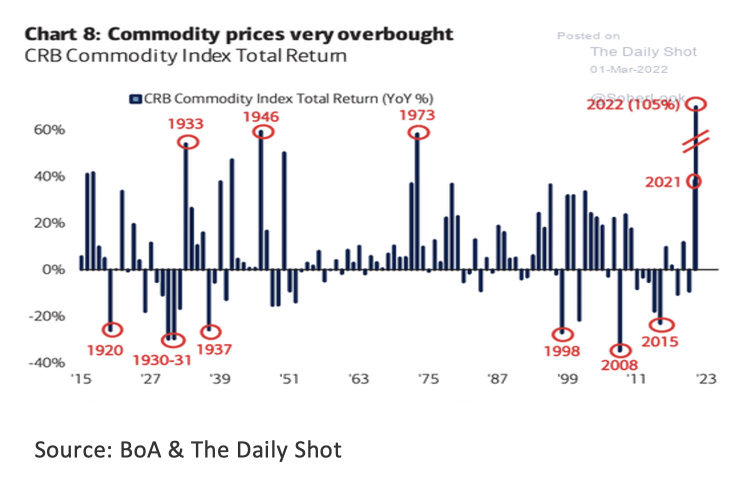