Both the ECB and the FED have raised rates again by 75bp since our last monthly report. Both central banks also indicated that in all likelihood it was still not the last rate hike.

For the time being, it remains remarkable that, despite all the monetary tightening that has taken place in the meantime, economic growth in both the Eurozone and in the US remains relatively good. Economic growth in the Eurozone was positive again in the third quarter (+0.3% QoQ, +2.1% YoY). The US economy also grew in the third quarter (+0.6% QoQ, +2.4% annualized) after the earlier contraction in the first and second quarters. However, economic growth was almost entirely due to exports and on balance, the domestic economy made little or no contribution to growth.

While the economy appears to be only partially affected by the most aggressive monetary tightening by central banks since the turn of the century, the general expectation is that this is only a matter of time. Important leading indicators in, for example, Germany (IFO) and the US (Yield Curve) clearly show that a recession in 2023 is very likely.

Nevertheless, renowned research houses such as Oxford Economics and Capital Economics still expect a U.S. recession to be relatively short and mild.

While Oxford Economics expects a mild recession and negative growth for 2023 in the US, the Eurozone, the UK, and Canada, it is noteworthy that both the IMF and the consensus still assume that most countries and regions will be able to show a small economic growth on balance next year. The UK is the big exception. Capital Economics, on the other hand, forecasts negative growth in 2023 in both the UK and the Eurozone.

Although the graphs clearly show that there are differences in the expectations for economic growth in 2023, there are also several clear similarities. Economic growth expectations are low at all research houses and if a recession is expected, it will be mild. We also still expect a mild recession in 2023 in the US, the Eurozone, and the UK. This is however subject to the assumption that in the United States inflation will soon fall significantly. On the positive side, both leading indicators in the US and China seem to indicate this.

Also, research houses such as Alpine Macro and Barclays see that inflation will soon fall quickly and sharply in their economic models.

If these expectations come true, central banks will be less forced to continue raising interest rates in 2023, household purchasing power will not come under severe pressure again in 2023, and, in particular, the negative contributions of Housing and Inventories to the economic growth in the US will become less negative and the mild recession predictions of research houses such as ABNAMRO may come true. 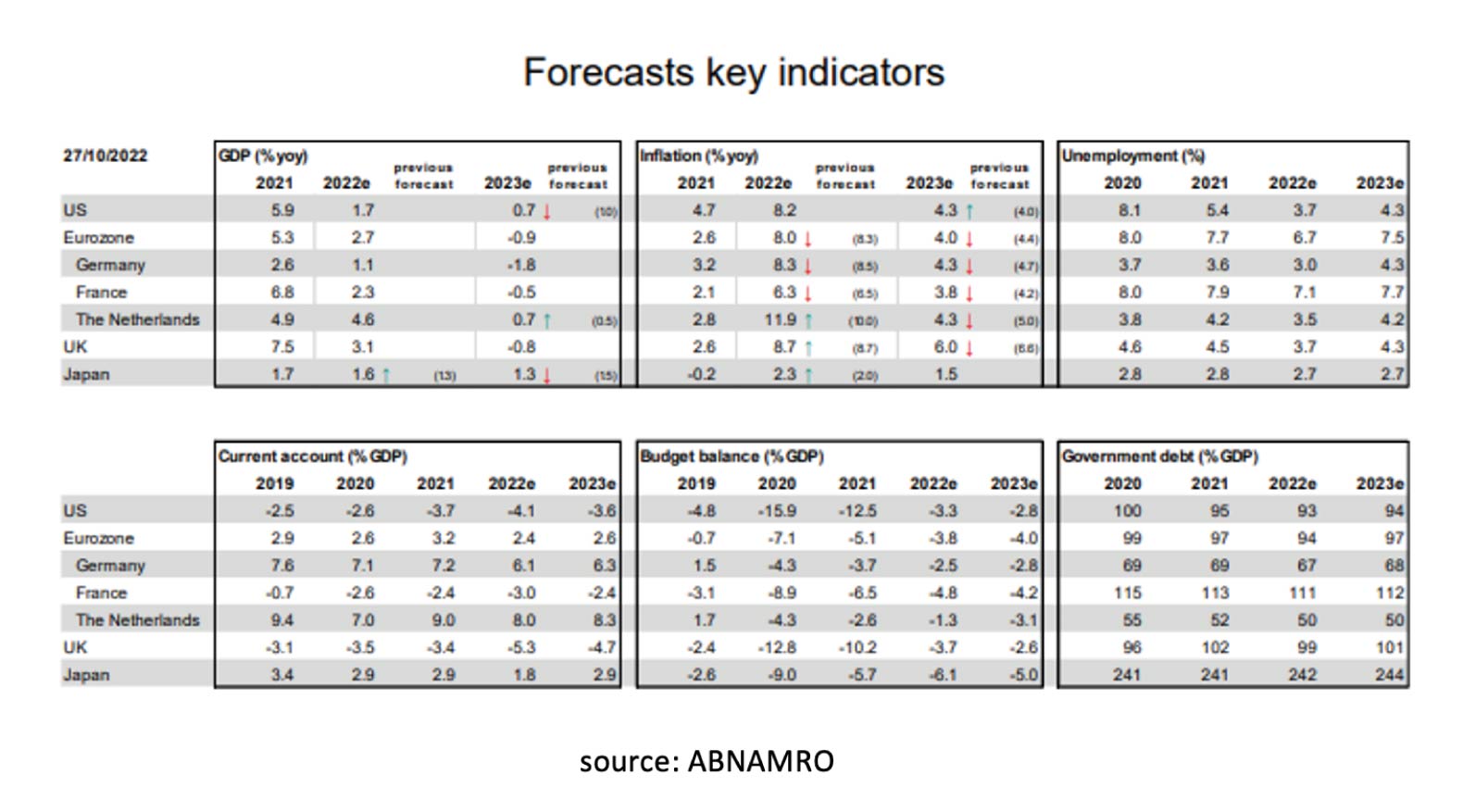 In the previous monthly report, we already wrote that October is, historically, the month in which a new rally in stocks has most often started since 1932. While 2022 will most likely still go down in the books as a very bad year for all asset classes except Commodities, October was a good month for equity investors.

October was a particularly good month for investors in Value and Small Cap stocks, which again significantly outperformed Growth stocks. The biggest disappointment in October was the Chinese stock market where both disappointing economic data and the 20th Congress of the Communist Party sharply worsened shareholder sentiment.

The good performance of equities was mainly because equities became attractively valued at the start of October.  Analysts still see corporate earnings rising, albeit slowly, in both 2023 and 2024, which remains positive for equities.

Second, in particular, earnings expectations for Growth stocks are downgraded by analysts. Third, the P/E ratio of Growth stocks is higher than the historical average, while it is lower for both Value and Small Cap stocks.

We continue to favor Value and Small Cap stocks as these are historically inexpensive but it is still too early to position a portfolio for the next bull market in equities. This usually only starts after the FED has reached its target and starts converting the monetary tightening policy into a monetary easing policy. The outlook for equities will therefore remain shrouded in uncertainty for the time being.

October was a good month for somewhat higher risk bonds such as High Yield bonds and Leveraged Loans. In addition, it was remarkable to see how positive the departure of Prime Minister Truss was for UK Gilts.

In both the US and Germany, capital market interest rates rose further as a result of heightened fears of a structurally higher inflation rate and ongoing monetary tightening by both the FED and the ECB. The positive for bonds is that yields on almost all bond classes have not been this high in the past ten years. High Yield, Leveraged Loans, and EM Hard Currency Debt in particular now offer attractive yields.

It is also good to realize that the peak in interest rates is usually reached well before the last rate hike by the FED. However, a 30-year-long Bull Market in UST 10yr came to an end in October. It seems likely that in the coming years we will have to deal with both structurally somewhat higher inflation and capital market interest rates than in recent years.

October was not an easy month for commodity investors. In addition to US gasoline and Brent crude, whose price was up more than 10%, commodities such as cotton, iron ore, and coffee were down more than 15%. When investing in commodities concentrate on oil and gas which will benefit from (speculation on) a cold winter.  The chart below shows that also the market cannot determine a direction in this regard.

What is remarkable in commodities though, is the continued decline in the price of Gold despite fears of structurally higher inflation. What makes it even more remarkable are the incessant purchases of Gold by Central Banks.

Finally, some charts and comments about the (US) housing market. House prices in the US fell in both July and August. However, there is still a long way to go before house prices are more in line with wage developments.

For both owner-occupied homes and rental properties, housing requires an increasing share of income.

For those who might think that the housing market is mainly a risk in the US, finally, some graphs show the picture worldwide. For the real estate market, it is hoped that (mortgage) interest rates will fall again soon and/or wages will continue to rise significantly over a longer period. If not, (further) a fall in home prices seems inevitable. 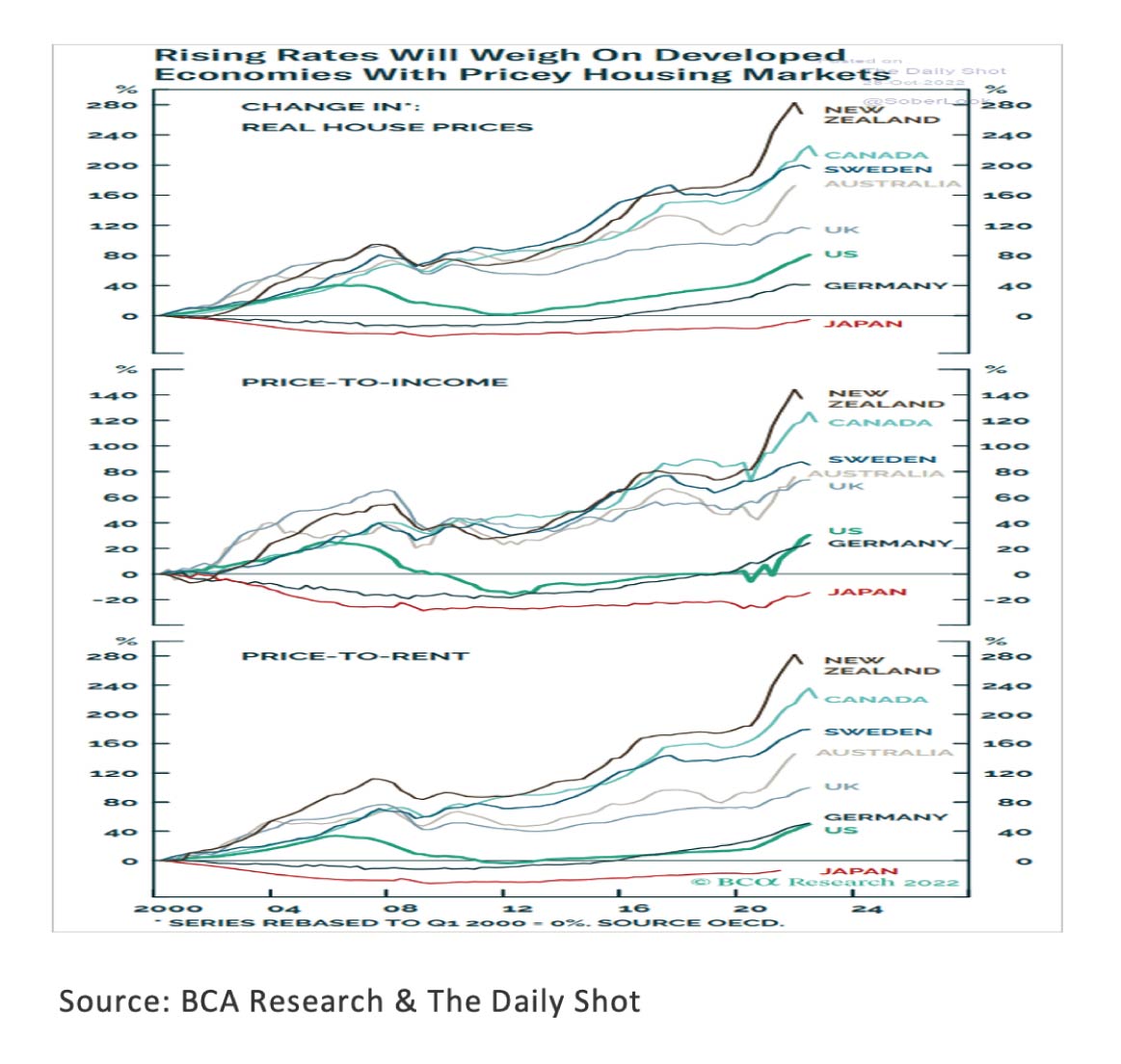 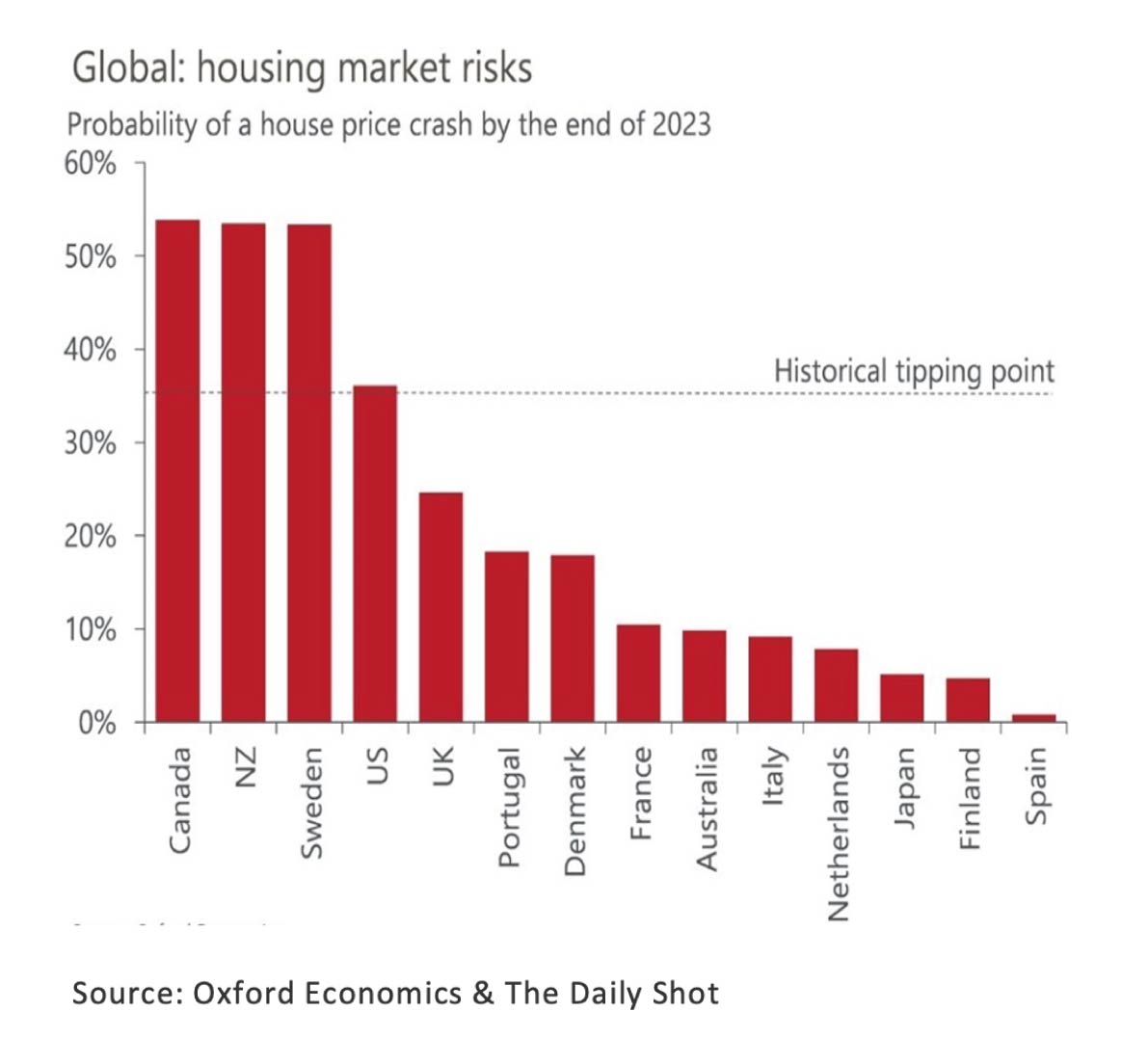 While the information contained in the document has been formulated with all due care, it is provided by Trustmoore for information purposes only and does not constitute an offer, invitation or inducement to contract. The information herein does not constitute legal, tax, regulatory, accounting or other professional advice and therefore we would encourage you to seek appropriate professional advice before considering a transaction as described in this document.
No liability is accepted whatsoever for any direct or consequential loss arising from the use of this document